Hello,
Contours that cross each other (or have in between points laying at same position) are only processed in one pass with

It is not possible with Feature 2 Axis - Profile Rough. So the pattern “Contour Ramping” can not be used and in the engraving operation there is no ramping pattern.

Below is a sample. Numbers tell the way I draw the polyline. 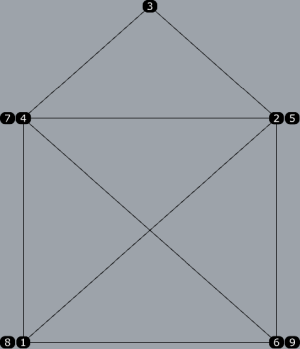 And here are the toolpaths:

I do not have any idea why…

So it is also not possible to process grid tasks (e.g. vacuum table) efficiently (means no movement to Feed/Rapid/Clearence Plane in between) because even own drawn milling paths are not traced with Profile Rough operation.
Or is there another way out of this?

Hi @Eric,
unfortunately no.
In the case of the example you first select all geometries getting the calculated toolpath as followed:

I suppose, you then did the second operation subtracting all lines not being in the toolpath of the first operation that leads to

Your solution is not going straight from one start to one end. You have to generate at least two of them. it must always be considered, which geometry needs to be chosen, that all will be milled. The housing sample was just a sample. If there are more complex geometries, it becomes more worse and harder to get the proper arrangements. Further on not having a straight toolpath, milling time lasts longer and result will not be that good, as having a continuous milling path.

What I want is:

sorry, I am not skilled in drawing with BC so I didn’t get it up, that point 8 is matching point 1. I just moved it a little bit up.

I did not spend much time on it. Just another way to look at your issue.